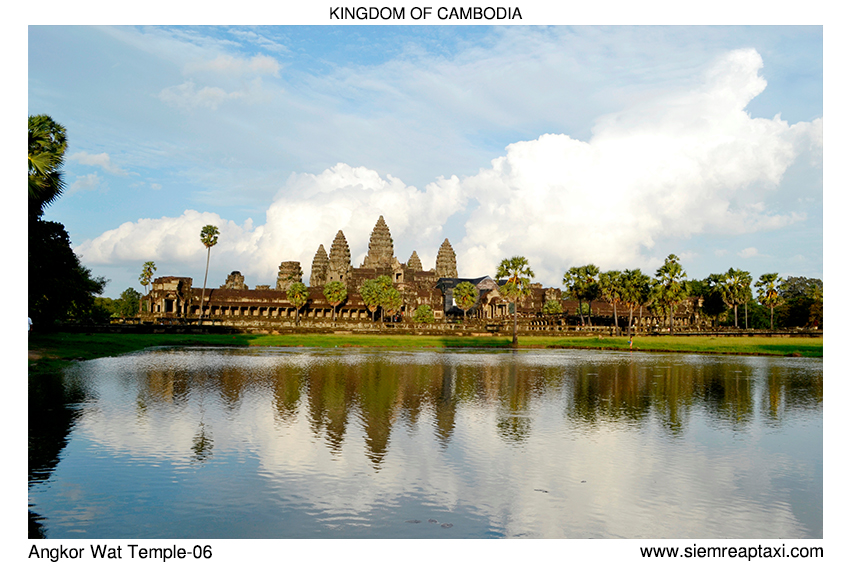 Angkor means town or city.
Wat means monastery or pagoda.
Angkor Wat was built in the reign of King Suryavarman II, in the early 12th century for dedicated to the Brahmanic trinity: Vishnu (god of protector), Siva (god of creator and destroyer) and Brahman (god of creator with four faces). Angkor Wat was symbol of the Meru Mountain which was the homage of the god Kings. The main point of Angkor Wat is five peaks and the rampart was surrounded by the moat outside. The rampart was represented the line of the mountain that was surrounding the temple and moat was in stood of the ocean around the mountain outside. If we say about the function of Angkor Wat is the shrine which was enshrined the king's ashes after he had died. Beside this we can call Brahmanist monastery also, because in that time the king or mandarins or people always made the festival of the commemoration or worshipped there too. Angkor Wat has two entrances. The main cause way is at the west side, because it was used when the king had been escorted. Exception the east side, it is the simple way which was transported something like: throne, palanquin, carpet and something else on three days before the king wanted to go there. All the ways were built across the moat and decorated by Naga-Balustrade symbolized of Rain-Bow bridge.