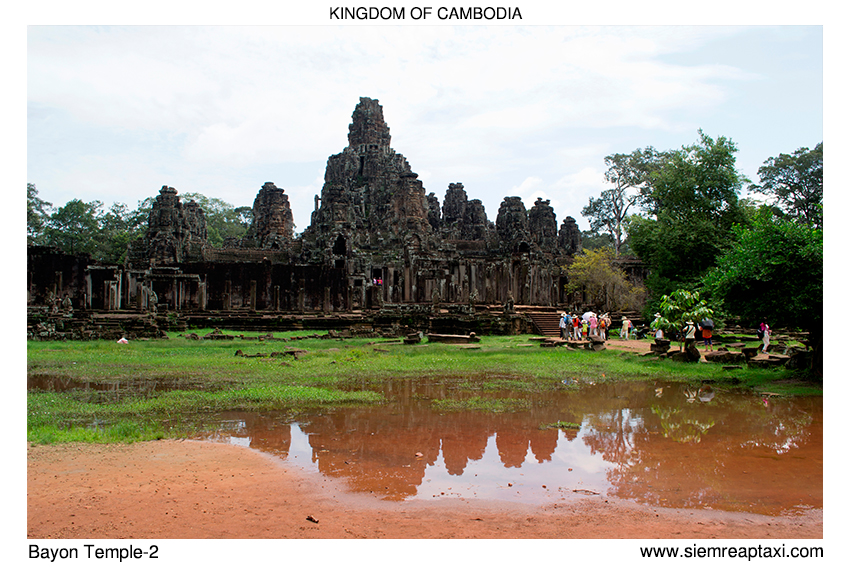 Angkor Thom is the name of the capital city; it is not the name of the temple. There are many temples inside: Bayon, Baphoun, Terrace of Elephant, Terrace of Leper king, Suor Prat, Phimean Akas, Prah Palilay, etc.  So this is the south gate of Angkor Thom. The entrance was decorated by Naga balustrade with the statues of gods and giants are pulling the serpent that had entwined the mountain of the churning of the sea of milk. Every gates of Angkor Thom were decorated like this. The gods are symbolized of the good spirit and the giants are symbolized of the bad spirit. All the gates were decorated by the head of Lokesvara, which four faces symbolized of four divined states of the mind of king like:

Anyways, they put the lotus-crown on the head of Lokesvara for expressing of Buddhism. On each corners of the door, we have still seen the sculpture of Indra, is being on the elephant with three heads. After, we have passed the door into the city of Angkor Thom, we can see the jungle very loftily, and then we see one temple is Bayon. It was built at the end of 12th century in the reign of the king Jayavaraman VII, for dedicating to Buddhism. Byaon was taken building nearly 20 years, so it is why we have still seen the different scenes on the walls of first gallery and second gallery.

The main entrance of Bayon temple is at the east side, which was decorated by Naga balustrade too. But it is rather strange by Naga fought with Garuda. When we get up to the gallery, we as the tourists to turn left and describe it in the south side of the east gallery. They tried to carve these sculptures in order to remind in the past event happened in the reign of King Jayavaraman VII, in during four years (1177-1181). Cambodia was dominated by the eastern government of Champa (Hanoy). In that time, the king jayavaraman VII transported the army to rpress Cham out of Cambodia. So this expedition was let by the general commander Jayavaraman himself, and he was supported by the Chinese army that wore the different headdresses. Beside this, we can see the special force of Cambodian uniformed by the crossed cords. Do you see the transportation behind? Yes, we do. The refugees always follow the army with carts that were charged in by the provision, but in that time one of the carts was accident, so the man had mended it and some of them are drinking gin (booze).

The attackers came back from the battle field, after they had succeeded of war. As you see, they are on the way and the armies lifted their weapons to express of the cheer. At the end of scene, we see one of the men is killing one buffalo to sacrifice to the god of war.

When the Chinese people lived in Cambodia, they preferred to make the living by sale. This is one restaurant that was sold by Chinese sellers. The middle scene was said about one discussion between the chief of traders and his assistants what they buy from Cambodia to sell in China.

This is the picture of Angkor Wat with three towers and they wanted to say the funeral ceremony of the king Suryavaraman II. As you see one urn was used to hold the ashes of the king. Beside this, we see many congregations had come to participate in that time. It means, before they get up on the steps, they always clean the feet. Then we see one traditional ceremony of devoting moon.  Some women are idolizing to the god of water Prah Gangkear,  with lots of the offerings.

When we see this picture, we reminded to the people in the past, because Cambodia was aggressed by Cham invader. In that time Cham attacked strongly on the Tonle Sap side. Cham wore hats, but Cambodian not. Always we have never forgotten to show the real lives of people who had lived around the Tonle Sap side. At first we see one butcher’s. This woman hangs beef, pork by the hook and maybe she is waiting her husband who is drinking Gandja. What is the seller doing? She is grilling the fish for the gin drinkers. What do you say this? This scene was said about the hunting man. The life of the hunter is full of danger. As you see, this man tried to kill the tiger, but he didn’t know what behind. Look at the next scene, these Chinese people peddled from one village to another, but on the way had got the accident. As you see this man who was bended the neck by tiger again.

This is the druggist. He is giving the medicine to the patients and then we she many pregnant women who were being painful in child birth in the maternity. What do you see then? We see the cook-fighting between Chinese and Cambodia betted each other, in order to get the gift. There are wrestling and fencing in during four years, because in that time Cham patrolled everywhere on the water side of Tonle Sap.  Final part, we see one party. Below is the kitchen and middle is the reception and the highest is the place of the king.

This scene is not sure, but the explorers revealed that, it is the procession of the king Jayavaraman VII, coming from his camp into Angkor Thom, after they had pushed Cham out of Cambodia and with the solemn parade. In that time they took the victorious elephants that the king used in the battle field.

The west gallery (the south part)

They wanted to say about the patriotic armies were led by the king Jayavaraman VII, and they were patrolling around their citadel. The next scene was said about the supreme assembly and the general commander was discussing about the plan to break into Angkor Thom, and the committees expressed too. Look at this place, these are the heads of Khmer traitors were supported by the foreigners, because they had betrayed their homeland. It mean, when someone tried to do the same this treason, so that one will be beheaded like this. Now we look outside of the citadel, we see the fighting between Khmer traitors and Khmer patriots.

This scene was said about the civil war of the national armies lived in the citadel. In that time, they wanted to widen their zoon, and then burnt the fire. As you see, they are on the way and persuaded the people to join with them. These people are sitting on the part side of the way with welcoming.

The north gallery (the west part)

At first, we see many diplomats of Chinese and Cambodain were chatting about this or that in the plaza. Then they see the acrobat who was conjuring for the audiences. Look at this man, he lay down and moved the wheel. If we look at another man, he supported three boys, one is on the head and two others are standing on his palm. This is one scene of the musician who was paying harp and fiddle. The next scene, we see the monks played and sprinkled the sacred water over the congregations, after they got the offerings.

This scene was said about Cham armies were chasing after the Cambodian armies, when they had defeated. As you see, on the way Cham killed khmer soldiers. There are many khmer soldiers were injured and some of them were lifted on the back of elephants and others were carried in the cradles. The final part, we see the defeated armies and they fled to refuge at the mountain, Phnom Kulen.

The east gallery (the north part)

This is the fighting scene between Cham and Cambodia. Khmer army is pushing them out of Cambodia.  As you see, Cham armies had injured very hardly in the battle field and this is the last day for them. Finally, they were compelled to leave from the golden homeland (Kampuchea).

If we past to the south gate, we lead and show the tourists about the difference face scenes from side to side, but do not forget to demonstrate to one statue was placed in the central tower. Then we walk around of the third level and lead them to get down at the north way and turn right to watching the sacred-well (lucky well), and one linga of Siva that was placed on the pedestal of vulva of Uma.

Anyways, if the tourists ask you the function of 49 towers (formerly 54 towers symbolized of 54 provinces in Cambodia) and then we stand steadily and depict. This is the central tower, bigger, highest that was decorated by friezes, false doors and false windows. What did they place inside? They placed the statue of Buddha. Why did the call sacred-well? This well was symbolized of luck. It mean, if someone could take the water up to clean the face, then that one is full of luck. This is one linga of Siva was placed on the pedestal of vulva of Uma. It mean, these both were symbolized of creator. Formerly, in 1181 passed to 1220, some people in Cambodia always worshipped this linga and they arranged one ceremony of linga cleaning, it implied about the gratitude to their parents.